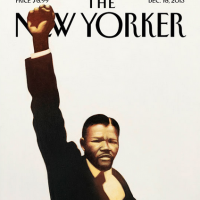 Oh what to write about?

I’ve set myself a target of writing a new post every Thursday, or at least starting a new post every Thursday,  because as I’ve read many times from various  writers, most notably Drayton Bird, when you think you have finished the copy, even if you think its really amazing, put it down and read it again 24 hrs later. Because there’s certain to be something you will want to change.

So what to write about?

Just heard on the news that Nelson Mandela is dead. That’s pretty seismic, I remember my Nan reading The Long Walk to Freedom years ago, and telling me about his story, she was a big gardening fan and was really impressed that one of his saving graces while he was in prison on Robben Island, was the fact he was allowed a garden and this was a great source of pride and escapism for him. That made her very happy.

I’d be lying if I said I was an authority on the man, but he is a massive figure in historical terms, the images of him walking out of prison when he was finally released is truly iconic, and to become president of South Africa after serving 27 years in prison is an amazing feat of endurance and belief.

Not to mention helping to bring about the end of apartheid.

And bringing the World Cup to South Africa.

Imagine the strength and faith needed to have endured a 27 year prison sentence, and maintain the desire and belief not to give in.

That one day your cause will be justified and you will free a nation.

It must have seemed a million miles away when he was banged up in solitary confinement, sleeping on a straw mat like a dog. But he never gave in and continued to study and learn when he was in prison. True Faith Indeed.

Seeing all of the tributes about the man coming out now is truly inspiring, saying that though I have seen people on Facebook calling him a terrorist, and the hypocritical right wing Tories paying tribute to the man they wanted to hang. Diabolical.

Personally I think he was a great man, maybe the biggest figure in human history so far, maybe not.

But most definitely a truly inspiring man, as a white man, and a big fan of the blues, its hard to fathom how the indignity of racial segregation an apartheid must have been for black people.

But if Mandela stands for anything, in my eyes it must be triumph over adversity,and above all dignity.

He set a very high example of what we can all achieve in our own way with belief in what we do, and perseverance to keep on going in pursuit of your goals .

What the mind can conceive, and then believe, it can achieve. – Napoleon Hill

There is no passion to be found playing small – in settling for a life that is less than the one you are capable of living.