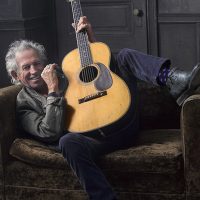 Keith Richards has done it all when it comes down to playing music and partying, his autobiography ‘Life’ is one of the best books you will ever read, some of the tales in there are legendary, and how the fuck Keith is still alive is a miracle in itself.

In the days before mobile phones captured everything, they could get away with all sorts and keep it private, to a degree I suppose.

It all makes for a great legend to emerge, and the fact that Keith is still out there touring with the Stones and making great music is testament to his amazing durability.

The stories below are taken from the NME, read on at your leisure.

Few can say they’ve done or seen as much as The Rolling Stones ’ axeman Keith Richards , a man described by famed hellraiser Robin Williams as “the only man who can make the Osbornes look fucking Amish.” In celebration of his 72nd birthday, we’ve rounded up some of […]

A country manor, some blue dwarves

Richards bought his Sussex country estate Redlands for £22,000 back in 1966. While enjoying a lovely lunch of cocktails and LSD there, Richards (along with Mick Jagger and Marianne Faithfull) answered the door to what Keef describes as “a whole lot of dwarves” who seemed very angry about something. What he failed to realise in his intoxicated state, was that it was the police, who’d been tipped-off by a tabloid about a ‘raucous drugs party’, and had come to nick the lot of them.