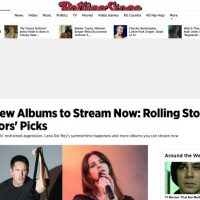 I have been reading the “Lefsetz Letter” for a number of years now, and it is a great read, he’s funny in the way he puts his point across, but the points he does cover, whether it be about music or wider culture, its always an interesting read.

I read recently that Rolling Stone magazine was up for sale, I used to read it every month, but I haven’t bought a copy for years.

I go online to read about music these days, and thats probably the issue for the magazine and falling sales, so it seems that Rolling Stone may have caught out, once the symbol of cool and counter culture.

I think Bob sums it nicely, have a read below.

“Rolling Stone, Once A Counterculture Bible, Will Be Put Up for Sale”

And sooner or later Everybody’s kingdom must end

“The King Must Die” Elton John

That’s where I found out about Elton, “Rolling Stone,” but Elton soldiers on, “Rolling Stone” is headed for the dumper. Like “Men’s Journal,” sold to “The National Enquirer”‘s David Pecker, which in one issue under its new owner lost all credibility, lacked any soul, any lengthy riveting article of the stripe that used to make the subscription worthwhile.

Now I can reminisce, about me and the mag, cheering for it and its outsider status and then watching as it became mainstream along with its coverage of Patty Hearst.

But the future is in front of us. And anybody who continues to look back, is doomed.

That’s what Jann Wenner did. He kept satiating an old audience that fell off and failed to cater to a new audience that just didn’t care.

Who is the cultural guru of the last twenty years of the twentieth century?

It wasn’t anybody in radio, which followed trends.

It wasn’t anybody in radio, which followed trends.

And it wasn’t anybody at the record companies, which stopped investing in careers and went for flash.

I’ll argue it was one man, with a team of sometimes unheralded charges, and that’s Tom Freston, who ran MTV Networks.

You see Freston realized you’ve got to burn the past to enter the future. Something that Wenner didn’t even try until way too late, shortening its best feature, its record reviews, to compete with “Blender”‘s bits before it was revealed that Felix Dennis’s music magazine fudged its circulation numbers, and then bit the dust.

Or, as the bard so often lauded by Wenner once sang…

He not busy being born is busy dying

The original VJs were the biggest stars in youth culture, even bigger than the musicians featured in the videos they played.

But what did Freston and his team do?

They were too old. MTV made a conscious decision to appeal to the same young demo consistently.

And the outlet learned that videos got lousy ratings, MTV started airing half hour shows, the game show “Remote Control,” and the reality series “The Real World.” And the oldsters bitched but the youngsters ate it up.

And then Sumner Redstone blew out Tom Freston, after handing Tom the reins of Viacom.

Meanwhile, Freston invested in “Vice” and overseas TV outlets and looks like a seer.

Now let’s credit Jann. He started “Rolling Stone.” There were competitors, but they all failed. The power of the individual can never be underestimated.

But Steve Jobs eliminated the floppy and legacy ports.

And “Rolling Stone” refused to go online and looked no different than it ever was, as it turned into “Mojo,” albeit with crappier writing.

You can live on your heritage in the arts. Copyrights have value.

But not in tech. And not in news. You have to look forward, you have to destroy your past to have a future.

And Jann Wenner was living in the past.

Now don’t lament the sale and the eventual irrelevance. Because the magazine is already irrelevant. Music does not drive the culture, the oldster players don’t do anything new of value and although Matt Taibbi is a star, he’s in a ghetto of blah, like having Einstein preaching to six year olds.

Taibbi will continue. As did Tom Wolfe, as for Hunter Thompson…he just burned out, but he’s certainly radiating.

But those were different days. when talent was revered and seen as bigger than the executive. But in the moneyed culture of today it’s the business person who is considered to be a rock star, with their riches and perks, and the artists take a back seat. Furthermore, the artists try to imitate the business people, and if you think this is untrue you’re unaware seemingly every successful artist invests in startups and has a perfume and clothing line and it would be enough to depress you if you weren’t scrambling to put food on the table to begin with.

We need to believe in something.

Once we could in “Rolling Stone.”

Won’t anybody fill it?