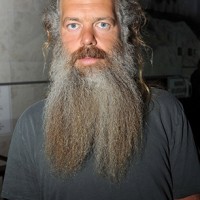 The below article was originally published on Rollingstone.com, and covers how Rick Rubin uses meditation to get him self together before he works in the studio, having used meditation myself for a number of years now. I think its a great skill to have in your life to help deal with the day to day shit that life sends your way. Enjoy.

“We’re happy to be here,” Dixie Chicks singer Natalie Maines said last night, “honoring the man who never allows himself to be honored.” That man was legendary producer Rick Rubin, who consented to receive the “2014 Lifetime of Harmony Award” from the David Lynch Foundation only because Lynch convinced him that it would be good for the cause of transcendental meditation (the Foundation’s primary mission is teaching TM to at-risk populations).

Rubin didn’t even get onstage to accept the award: Lynch had to bring it to Rubin’s table in the audience, where he was sitting with guests that included a green-haired Flea.

David Lynch on enlightenment and Yeezus

Although Rubin received video tributes from many of the heavy bands he’s worked with (Black Sabbath, Metallica, Slayer, System of a Down), the musicians who showed up to the Beverly Wilshire Hotel (in Beverly Hills, California) to pay musical tribute were the Dixie Chicks, doing a half-dozen songs with a full band (the best of which was the lovely “Lullaby”) and a pair of singer-songwriters with acoustic guitars, Damien Rice (who’s been working on an album with Rubin for the past two years) and the young Jake Bugg.

The hip-hop side of Rubin’s music was represented by a speech from his old Def Jam partner, Russell Simmons, who talked about how 30 years ago, he used to get stoned in an effort to quiet the noise in his head. “At the time, I couldn’t relate to anyone who was sober,” he said. “Except for Rick.”

Before the tribute started, a trim Rubin sat crosslegged and barefoot on a chair in an empty banquet room, looking like a guru with his long gray beard (albeit one in shorts and a T-shirt), to discuss transcendental meditation’s role in his life and music. “I was going to take a bath before I came,” he said by way of introduction, “but we ended up working right up until the time I left.”

You’re a bath guy, not a shower guy?
Both. I like to take baths. We’ve been getting into ice baths, lately. So we’ll do sauna and get in a tub filled with ice, and stay as long as we can.

How long is that?
The longest I used to be able to do was five minutes, but then David Blaine came over and he got me to stay in for probably 12 minutes. He was telling me what was going on: “Your brain’s triggering all these sensations that protect you from dying, but you’re not dying — you can get out any time you want and you’re safe.” He made it OK.

How did you get interested in transcendental meditation?
When I was 14 years old, I went to see my pediatrician, the doctor who delivered me, because my neck hurt when I went to school. He said, incredibly for his day, that it was stress and I needed to learn to meditate. As he said it, I remember thinking, My parents aren’t going to go for this. But they said, “Oh, well, if that’s what the doctor says.”

Were you skeptical when you started?
I was open to it. I’m a Beatles fanatic, and the Beatles connection [they learned TM from its inventor, the Maharishi Mahesh Yogi] was strong enough that I wanted to learn anything that the Beatles were involved in.

Did you drop acid for the same reason?
No, I’ve never done that.

Did TM work for you?
I can’t remember how it affected my neck issues, but it definitely affected my life. I did it from when I was 14 until I was going to NYU. Maybe stopping was a backwards version of trying to find out who I was — meditating was part of my family life, even though nobody else in my family did it.

After I moved to California, I decided I was going to start again, after not doing TM for five years. To actually start took months: it seemed like a very big decision. From the first meditation back, I realized that the person I am was shaped by the experience of the years of meditation. I feel like I can see deeply into things in a way that many of the people around me don’t, or can’t

How has it colored what you do musically?

It allows me to be very present with the artists I’m with. I think TM has trained me to be a very good listener. It’s a big part of the job.

Are there times when you’re in the studio with somebody and you think they’d benefit from learning TM?

There’s a great deal of bullshit that people think about when they make music, things that don’t matter. TM kind of wipes that away, and you focus on the real job at hand, as opposed to thinking about what the management wants, or what the record company’s saying, or what somebody at a radio station might think.

Talk a little about your daily TM practice.

Typically, I’ll wake up, sit up in bed, and do 20 minutes. When I wake up in the morning, usually the remnants of dreams are still very present in me, and it takes me a minute to get to be me again. I’m a little lost when I wake up. TM helps me center and ground myself. When possible, I do it again before dinner. Then the evening starts as more of its own time, and not just a continuation of the busy work day. Although sometimes it’s a busy night.

What, go in a studio in night?

I try not to do that anymore. Now, we typically start working at noon, and are usually out of the studio at six — if things are really going good, seven. If things are not going so good, five. We don’t beat a dead horse. I meditated in the car on the way here, and I missed the exit.

People seem to talk about TM with both a mystical language and scientific language.

It’s both. I’m more attracted to the mystical side, but the reality is there’s all these scientific surveys that support the mysticism. It usually works that way — eventually science catches up to the magic.

Do you think your own creativity has changed over the years?

It’s always intuitive, but over time, the craft becomes better. In the beginning, I was a complete novice, and now I’m a complete novice with 30 years of experience. There’s wisdom that comes with experience. I would do certain things in the early days that wisdom would have prevented me from doing, and those were probably good things too! When I started in music, it was only about a drumbeat and words.

When I spoke with David Lynch, he singled out the minimalism of Yeezus.

Yeah, it’s awesome. I love how bold it was of Kanye to make such an un-hip-hop album. It’s really radical, and I’m really proud of him.

To what extent do you think of it as your record?

I always think of it as their record, and I just support making it as good as it can be. I’m the coach of the team, and if the team wins, it’s really good for me and I had a hand in it.

Are there times when the team doesn’t win?

Absolutely. And there are times when the team doesn’t win, and I’m still wildly proud and love it. Most of the time, when we leave the studio, I’m happy with what we’ve done, otherwise we’ve not finished. I don’t always have a say, but if I do, we keep working on it until it’s magnificent. [Laughs] By my standards!