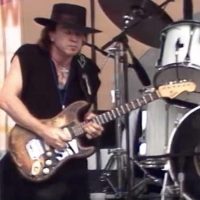 As a massive SRV fan, it was great to come across this article.

The article covers when Stevie played what was coined the “Biggest Party in History”. Not sure if thats true like but there is some great footage of Stevie playing his favourite Fender Stratocaster. In the style which is all of his own. Its great performance.

In the late Eighties, Miller Lite beer, in an attempt to boost sales, planned a publicity stunt in Texas. It was dubbed the “Biggest Party In History.”

In a campaign that included nearly a year’s of worth of TV and magazine ads, the company spent around $15 million promoting the events that would take place over Labor Day weekend 1989 in San Antonio, Corpus Christi, Odessa, McAllen, Houston and Dallas.

The latter two would host the largest variety of entertainment, which included everything from beach volleyball to live music to pro wrestling.

That weekend would also coincide with two huge stadium shows headlined by the Who (newly reunited for their 25th-anniversary tour), with support from Stevie Ray Vaughan and Double Trouble (who also were touring at the time, promoting In Step) and the Fabulous Thunderbirds.

Never one to miss a party, especially in his beloved hometown, SRV, who was scheduled to play to the sold-out crowd at the Cotton Bowl Stadium later that night, showed up with his band to give a short set for the tens of thousands in attendance in downtown Dallas.

A portion of his appearance that day can be viewed in the video clip below as Stevie Ray Vaughan and Double Trouble perform “The House Is Rockin’,” “Pride and Joy” and “Mary Had a Little Lamb” on September 3, 1989.

Tragically, this would turn out to be one of Vaughan’s final shows in the city before his August 27, 1990, death.

Jonathan Graham is an ACM UK graduate based in London studying under the likes of Guthrie Govan and Pete Friesen. He is the creator of ForgottenGuitar.com, a classic-guitar media website, and is completing his debut album, Protagonist, due for release in 2016. Updates also can be found at Graham’s YouTube channel.