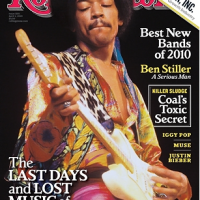 For me he was the best rock n roll guitarist ever, he just  took it to somewhere no-on else ever has. Unbelievable sound.

I remember first seeing a video of him on the telly when I was a kid, the arl burning the guitar shots, and I remember thinking “What the fuck is he playing”? I’d never heard anything like it. I can’t say it blew it me away, I just wasn’t sure what the fuck it was.

Then when I got a bit older I listened to Electric Ladyland, and I just got it, this time it did blow me away, especially track 4, Voodoo Chile, its a fifteen minute slow blues with Steve Winwood playing the Hammond, its a live jam and Jimi’s guitar work is unbelievable, I used to listen to it constantly.

I’ve just been reading a good article on the Rolling Stone website called Jimi’s Last Ride, charting the final days of Hendrix’s life, its a really tragic tale. Me and my mate Gareth went through a really good lets learn all we can about Jimi phase, we used to get our guitars out and practice jamming to his tunes, we read books and watched every documentary we could find.

Its a great story of how he left the army and got to New York, where he was introduced to Chas Chandler of The Animals, he brought Hendrix to England and the rest as they say is history. Behind the scenes though it doesn’t seem like he was enjoying things as time went on, his manager was rumored to have mafia connections, and was supposedly using him as a cash cow, trying  to keep him on tour and siphoning the money.

He went through  a few band member changes as well, Billy Cox replaced Noel Redding,  then he fell  out with Billy Cox again, so reading between the lines things were a bit turbulent, never the less I have just listened to his final interview and Jimi sounded upbeat, talking about the future direction of his music, how he admired Pink Floyd. Its a good watch.

No doubt his last few weeks were not happy ones, apparently fighting for money from his management, which had also been an ongoing battle to fund the building of his Electric Ladyland Studios in New York.

Another article I read today suggested Jimi Hendrix was out of control during his final days in the studio, who really knows now, and never the less his legend lives on, and we still celebrate his genius today, and I don’t know whether we will ever see another guitarist like him.