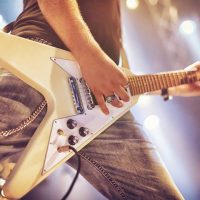 Really good article below about the roots of the Fuzz guitar.

When Les Paul and Leo Fender introduced their electric guitars in the early 1950s, they were looking for a way to compete with louder instruments like horns, drums, and even the piano. Winding wires around magnets turned into pickups, which then sent pure, clear tones to an amplifier.

In 1954, this was considered the ideal sound for the electric guitar: a louder version of a steel-stringed acoustic.

Others weren’t so sure this was the best use of electricity.

Junior Barnard, a Western-swing player, tried to dirty up his guitar sound as early as 1945 by messing with his pickups and amplifiers in ways that surely voided any warranty. Bluesmen like Elmore James, Buddy Guy, Howlin’ Wolf and Muddy Waters also experimented with getting fatter sounds off their guitars through the 1950s. And there were also some happy accidents.

In 1951, Ike Turner and his Kings of Rhythm were heading up to Sun Studios in Memphis to do some recording when their amplifier fell off the roof of their station wagon. They retrieved it from the side of the road and hoped it still worked when they reached the studio.

It fired up fine, but there was something wrong with the circuitry or perhaps the speaker cone. No longer did it deliver a pure sound from the guitar. But it did sound kinda cool. You can hear it following the saxophone line, giving everything a slightly dirty growl.

By the late 1950s, plenty of guitarists were getting distortion by either running their amplifiers at their limit, deliberately poking holes in speakers with knives, razor blades and screwdrivers, and in the case of Link Wray, switching out the vacuum tubes to produce new sounds. The result was an instrumental that sounded so dangerous that it was actually banned from radio in cities across the U.S., lest it incite violence among juvenile delinquents.

All these experiments were fine, except that there was little any player could do to summon distortion on command, let alone control the amount. Another happy accident was required.

In January 1961, country star Marty Robbins was frustrated by a malfunctioning guitar during the recording of a song called “Don’t Worry.” Session guitarist Grady Martin plugged his six-string bass into the mixing console and it sounded … funny. You’ll hear it the instant it comes in.

The effect — someone in the session termed it a “fuzz tone” — was rather interesting and once the single was released on Feb. 6, 1961, other players began calling Marty and Grady, asking how they got that cool sound. The problem was no one could figure out what ghost in the machine was actually distorting Martin’s bass.

The studio engineer that day was Glenn Snoddy. He tracked the issue to an output transformer on the console that had been provided to the manufacturer from a third party. Of the 50 transformers made, 35 of them were faulty — including the one into which Grady Martin plugged his bass.

Now that Snoddy had something to go on, he experimented with winding wires in transformers into which voltage could be regulated. He called his transistorized invention the Fuzz-Tone and sold the idea to Gibson.

The Maestro FZ-1 Fuzz-Tone went on sale in 1962, with 5,000 units shipped to dealers. Sales, though, were disappointing. Dismal, really.

Some guitarists got it right away — The Ventures, for example — but for the most part, it looked like fuzzing up a guitar wasn’t going to catch on.

Then, another happy accident, this time courtesy of Keith Richards.

While the Rolling Stones were on an American tour, a riff came to Keef Richards in his sleep as he dozed at the Gulf Motel in Clearwater, Fla., on May 7, 1965. He recorded it quickly on a bedside cassette machine, mumbling, “I can’t get no satisfaction,” and then immediately flopped back on the bed and went to sleep. When he woke up, he had the 30 seconds of the riff and 40 minutes of snoring.

On May 10, 1965, the Stones set up at Chess Studios in Chicago and recorded a country-ish, bluesy Bob Dylan-esque version of “(I Can’t Get No) Satisfaction.” He wasn’t particularly enamored with what he’d done. At best, he thought, this would be a decent filler track for the next Stones album. Keef thought his new musical discovery would sound great arranged for a horn section.

But then a second session was recorded a few days later at RCA Studios in Hollywood using a different tempo and, most crucially, with Keef’s guitar part funneled through a Maestro Fuzz-Tone. This recording, released in June 1965, was the final nail in the coffin for honkin’, over-blown saxophones’ role for providing the raunchy sound of rock’n’roll. That job now fell to the electric guitar.

“Satisfaction” was a massive hit. By the end of 1965, it was nearly impossible to find any kind of fuzz pedal in stock. Some 40,000 units sold out almost instantly. Imitators hit the market and soon the world was awash in powerful, loud, distorted guitars.

Glenn Snoddy died May 21 at the age of 96 as the result of congestive heart failure. The next time you hear a fuzzy guitar, say a quick thanks.

Alan Cross is a broadcaster with 102.1 the Edge and a commentator for Global News.