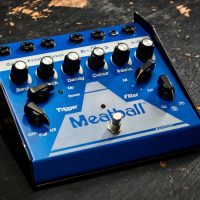 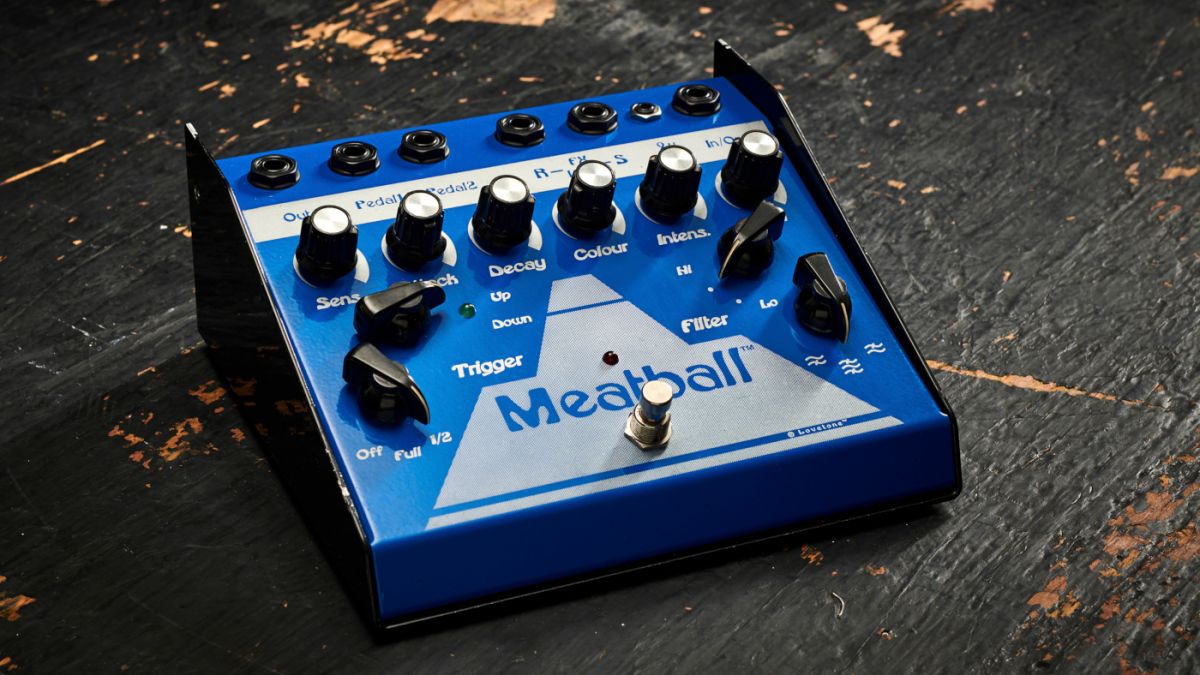 25 years after Lovetone’s first pedals launched, designer Dan Coggins explains how this tiny British brand’s effects ended up on U2 and Radiohead hits and acquired legendary status among toneheads…

In a classic ‘brain meets brawn’ story that began in 1994 in the small English town of Henley-on-Thames, Lovetone has gained near mythical status as a milestone on the road of effects pedal evolution.

Merging art and technology to a degree of originality accomplished by few, Lovetone’s intrepid arrival during the ‘birth of boutique’ in the mid-90s was welcomed with open arms and nurtured by a music culture that was ripe for sonic experimentation.

Lovetone pedals are coveted now more than ever for their inimitable (and often unpredictable) sounds – their virtues being extolled by sincere word of mouth among a cult following of guitarists, producers and engineers.

Similarly, in the late 90s as the Lovetone buzz steadily gathered momentum with each new unveiling, the company grew organically and injected life into a relatively staid marketplace dominated by cautious, utilitarian pedal designs.

We knew we were on to something, but I couldn’t foresee that [the pedals] would become what they are now

Lovetone’s statement was both well timed and striking. Unique, independent and with boundless possibilities, it embodied the spirit of innovation and artistic freedom. Together, Dan Coggins and Vlad Naslas pushed their own creative boundaries with sparks of ingenuity that captured the imaginations of music makers worldwide.

In turn, an inspired online community of pedal fanatics began to emerge, as people opened their eyes, ears, minds and wallets to a dazzling new era of effects.

“Looking back, we were just doing effects in a slightly different way,” reminisces Dan, with more than a hint of self-effacement. “I suppose that’s what Lovetone could be credited with retrospectively.

We knew we were on to something, but I couldn’t foresee that [the pedals] would become what they are now, or that the pedal market has gone the way it has.

“In the first paragraph of the 1995 Meatball manual [Lovetone’s debut pedal], we said, sort of facetiously, that it was ‘…required reading. After that you can bin it if you really want, but bear in mind that these could be collectors’ items in 30 years’ time!’

We did say that, but I was confident they were good, and people really did seem to love them. I just wanted to make some good gear for a short while, although, in the end, it lasted for well over a decade.”

According to Dan, Lovetone pedals were originally available to buy from 1995 through to 2007, albeit sometimes intermittently. Officially founded on 1 April 1995, the company went on to release four pedals later that year, which included: the Meatball envelope filter in May; the Big Cheese fuzz and the Brown Source overdrive in July; and the Doppelganger phaser/vibrato later on in September.

In 2002, Dan founded his solo venture, Dinosaural, to focus on a separate line of effects pedals, kicking off with the Tube Bender overdrive in late 2003, and as a means of servicing Lovetone products following their assumed discontinuation.

Dan’s final production runs sold out (again!) a few years later, and in March 2008, while pursuing a career elsewhere in hi-tech electronics, he threw in the towel at Lovetone for the last time before hanging up his soldering iron at Dinosaural.

However, it wasn’t before too long that inspiration struck once more and, in 2012, Dan resumed servicing and repair duties at Dinosaural while launching two new pedals: a smaller high-gain version of the Tube Bender called the OPA-101 Overdriven Pre-Amp, and the OTC-201 Opticompressor.

Along with a black reissue of Dinosaural’s original silver Tube Bender and the rare DMB-301 Dual Mode Booster treble boost, both pedals were discontinued in 2016 after a series of brief reruns.

“Dinosaural was mainly a repair business and I didn’t do as much with pedals as I’d planned to,” says Dan. “My initial idea was to make simple, unpretentious pedals and I kind of made my statement: less is more.

In the same way, if it was all down to me, the Lovetone pedals would all have had three or four controls at the most, but Vlad was a smart guy. The whole thing would never have happened without him.

“Vlad and I originally developed the prototype Meatball together because he was producing some sample libraries called Funk Guitar and Funk Bass for Ed Stratton’s Zero-G label.

Vlad and Ed had a Top 10 hit record in 1988 called The Jack That House Built with [British house music pioneers] Jack ’N’ Chill. Vlad’s 10 years older than me and I looked up to him.

It was very much a case of me having the technical know-how but not really believing it, and him coming along and kicking me up the arse.”

Having teamed up, the pair worked tirelessly, day and night, on a mission to perfect the Meatball.

“When I met Vlad in 1994, I was working nights as a shift engineer at the BBC World Service in Caversham,” remembers Dan. “I knew from my experience of working at The Beeb that certain components had better qualities than others, so I applied that knowledge and that was when I really started getting into the nuances of what was going on in the Meatball circuit.

At night, I’d have Radio 4 or the World Service going through it and I’d be adjusting the attack and release times to make it work on the voice. And in the daytime – if I wasn’t asleep – I’d be calling Vlad and telling him, ‘Come round and have a listen to this!’

“Vlad and I were testing it with a guitar in the daytime, and we’d be saying things like, ‘It needs more attack,’ or ‘It needs more resonance – the frequency is wrong.’ Vlad wanted all these things up on the front panel so you could adjust everything and I was fighting against that saying, ‘People don’t want to get that technical if they’re standing on stage trying to figure out what chord to play.’

“I thought people wouldn’t want to be fucking about with all these switches and knobs, as well as trying to perform. But Vlad was adamant. In the end, I said, ‘Okay, I’ll do it – I’ll put all these things on, but we won’t need them all.’ We knew the Meatball was eventually done when a cat started meowing back at us every time we made a sound with it!”

While an abundance of knobs, switches and jacks facilitated the Meatball’s kaleidoscopic choice of sounds, they also dictated its large console-like appearance – something clearly attested to by Lovetone’s advertising slogan: ‘Big Pedals To Trip Over.’

“Vlad and I are both 6ft-whatever and have size 12 feet, so the pedals weren’t enormous to us,” reasons Dan.

“We made them fairly large because we wanted to evoke that thing with old pedals. But we were equally inspired by the look of the prototype, which had a steel-console-shaped case from an old Sagem power supply testing box I rescued from a skip, and that translated to the smaller [Big Cheese and Brown Source] pedals as well.

The only change we really made to the look was the fins at the back, which were inspired by the rear lights on my Triumph Herald, and I guess there was also a nod to Roger Mayer’s Rocket effects.

“Roger Mayer’s fuzzes and the Sovtek Russian Big Muffs were among a small minority of decent fuzzes being made in the early 90s. I suppose the grunge thing really helped get people interested in vintage effects again.

There were people walking around in those Electro-Harmonix/Mudhoney Superfuzz Big Muff t-shirts with the Big Muff on the front, and Kurt Cobain almost singlehandedly resurrected the Small Clone. I’d been to the Reading ’91 and ’93 festivals and saw many bands who were into that kind of stuff that ended up buying and using Lovetone pedals, like Sonic Youth and Dinosaur Jr.

“I’d been playing in a band with a BC109C silicon transistor Dallas Arbiter Fuzz Face, but, because I was broke, I figured I should just sell it and build myself a fuzz pedal. Eventually, the BC109 fuzz I built became the Big Cheese.

In fact, that was how I met Vlad – I’d put an ad in the local Henley Standard and he called me up to ask about selling the Fuzz Face!”

Although Lovetone’s designs drew inspiration from vintage effects pedals and were primarily aimed at guitarists, they soon attracted wider attention from producers and electronic artists.

“A lot of producers also put drums and keys through Lovetone pedals,” recalls Dan. “Norman Cook/Fatboy Slim bought two Meatballs and there’s a photo of him holding one up to each ear and a caption saying that they were his “secret weapons”.

Our pedals were used on pedalboards, but producers liked them because they had this console thing where you could stick them next to the desk and use them for mixing.

“I knew we’d arrived when we went to visit the EMI/Abbey Road Studios and Steve Albini was recording with the Big Cheese and Brown Source.

Alan Moulder and Flood got the whole Lovetone set and then Flood turned The Edge on to us; he had a Meatball, a Doppelganger and a Big Cheese on his ’board, and when I heard U2’s [1997 No 1 single] Discothèque, I thought, ‘That has to be the Big Cheese’ – and sure enough, it was!

“I was chatting to Ed O’Brien at a Johnny Marr gig and he was thanking me for the Lovetone stuff, and I was telling him I loved what Radiohead did with the Meatball and Doppelganger on OK Computer.

He said the Ring Stinger was used for vocals on Kid A, which made me laugh – it’s such a bizarre track, so it’s fitting they used the most bizarre pedal we ever made.

“I was thrilled to know that Radiohead made exemplary artistic use of their Lovetone pedals, but I couldn’t have achieved any of this over the years without the belief and support of all our customers, so I’d like to thank them all.

“I had a set of my own Lovetone pedals, but I sold them all in 2012 so I could take my kids to Disneyland. The nice thing now is that when I get repairs come in, I can show my kids, ‘This is what I used to make. Check this out!’ It’s nice to put a line under it and move on to something else.

“I just love designing circuits and I’m honoured to now be collaborating with Adrian and Georgia Thorpe and their team at ThorpyFX. The new Deep Oggin chorus was very much a joint design and we’re looking forward to releasing more modulation effects soon. It’s onwards and upwards with ThorpyFX!”

We would like to thank Dan Coggins (Dinosaural and ThorpyFX), Seni Chanapai, and Vintage ‘n’ Rare Guitars